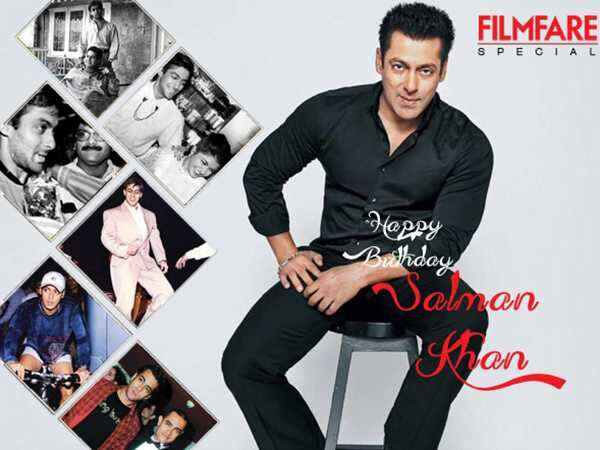 Salman Khan can never age. He can never be old. The age counter may be ticking onward, but Bhai’s perennial charisma and candour keeps making him more alluring every year. The reason is a personal and professional transformation where Salman Khan has gone from bad boy to big brother in the blink of an eye. So when he throws out unruly contestants from the Bigg Boss house on TV, we cheer for him like he’s an absolute saviour. And then his latest films like Bharat have reinstated our faith that Bhai’s star can only rise and rise more. On his birthday, we bring to you special moments from his hit and happening life. A true blockbuster career of emotions, romance and unlimited drama. Read on… 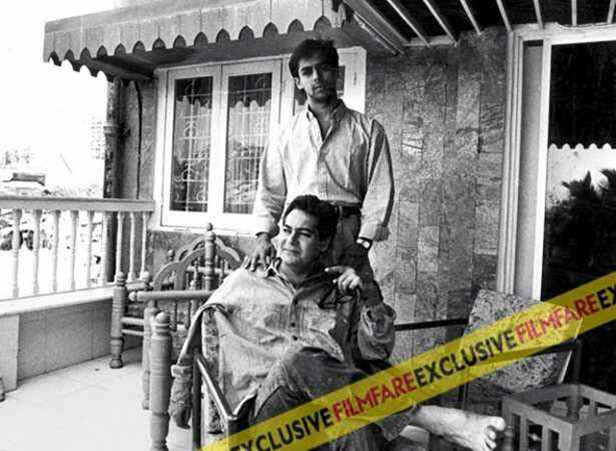 In the company of his father Salim Khan. It’s said that Salim Khan came into the industry to become an actor. The writer’s young dreams were realised later by his son. 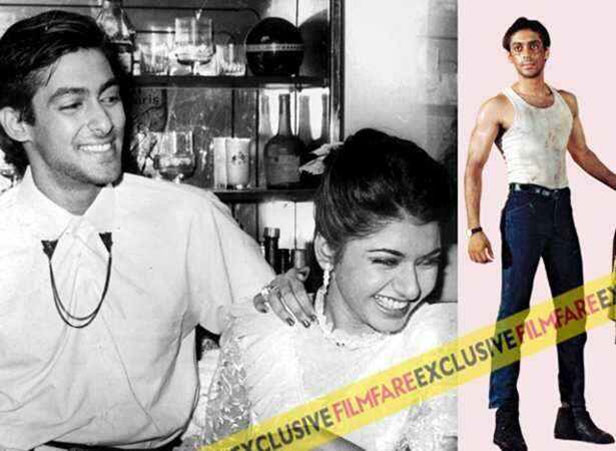 L) With Maine Pyar Kiya co-star Bhagyashree. The actors weren’t talking during most of the shooting as she had got engaged in the middle of it and her fiancée had allegedly told her to stay away from the macho star.

(R) His rugged look in MPK set him apart from other romantic heroes. 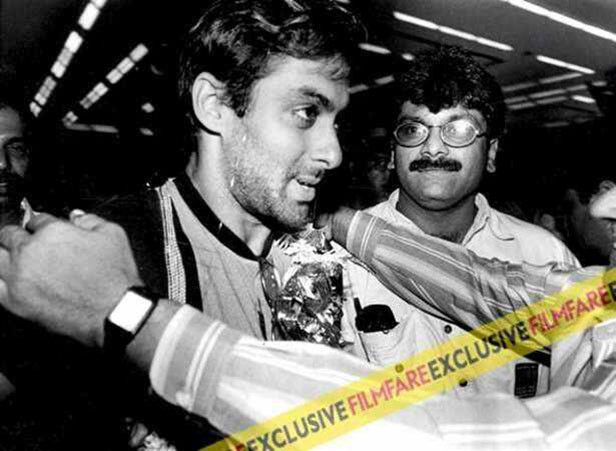 Roller Coaster ride
Salman’s career graph resembles a Disney ride. There is never a dull moment, even his flops aren’t without flair. One remembers Suryavanshi with a shudder, where he coloured his hair blonde and tried to ape Conan The Barbarian or Khamoshi: The Musical, where he seemed lost in the Bhansali created a sea of sighs and unfulfilled desires. There were hits like Karan Arjun, cult classics like Andaz Apna Apna and superhits like Hum Dil De Chuke Sanam as well. Currently, he’s become a one-man show like no other. Defying all logic, his films become a hit just because ‘Bhai’ is in the frame, flexing his muscles, glaring at the camera. Films like Wanted, Dabangg and Ek Tha Tiger are a testimony to this fact – they are all high testosterone affairs that provide nirvana to his frenzied fans. Off late he’s even found a bit of penchant for method acting. He recently shed all inhibitions and trappings of stardom to flaunt a paunch in Sultan. While he didn’t pile on as many kilos as competitor and friend Aamir Khan from Dangal, but it was a rare feat to see bhai, not in his flawless physique. There can be no imitators, Bhai remains a certified original.

A welcome back home after the black buck fiasco. Stars Neelam, Saif Ali Khan, Tabu and Salman were accused of poaching black buck during the shooting of Hum Saath Saath Hain. 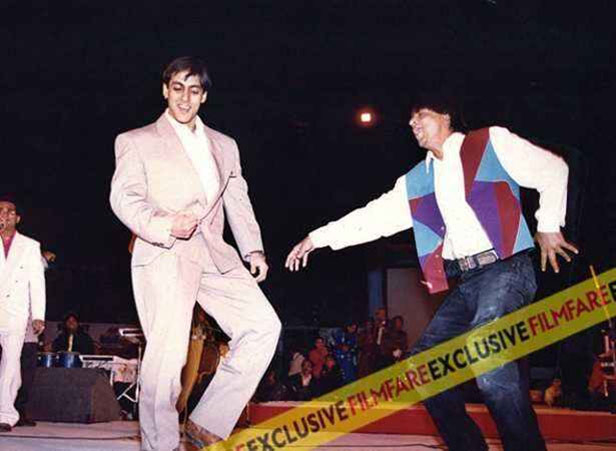 Dancing with Shah Rukh Khan during those younger and better times. The duo has continued to be close to each other over the years. 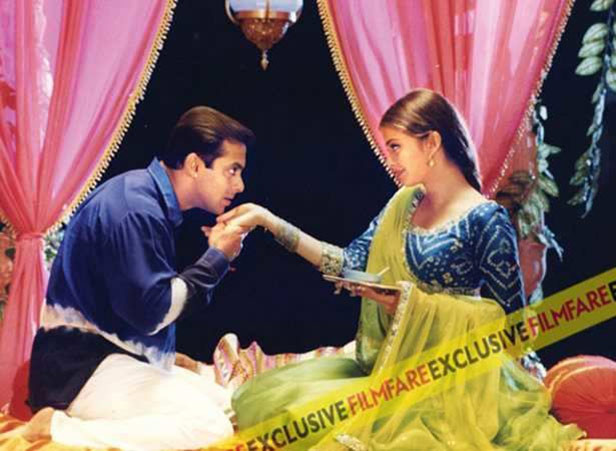 A still from Hum Dil De Chuke Sanam. The sizzling chemistry between lead pair Salman and Aishwarya Rai was attributed to the fact that the duo was very much in love at the time. 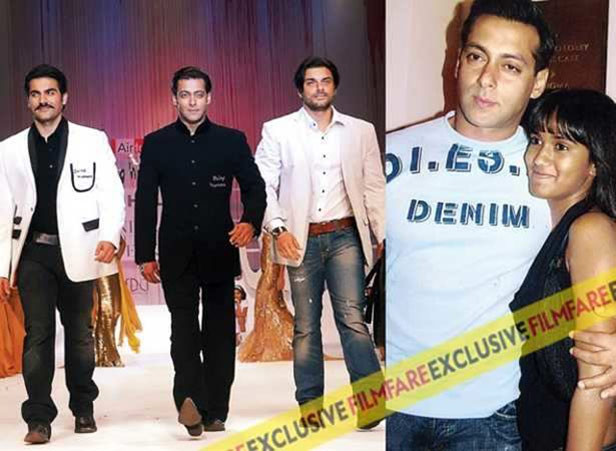 (L) Walking the ramp with brothers Arbaaz and Sohail for his charity Being Human.

(R) Salman is close to all his siblings and shares a deep bond with sister Arpita as well as her husband Aayush Sharma. 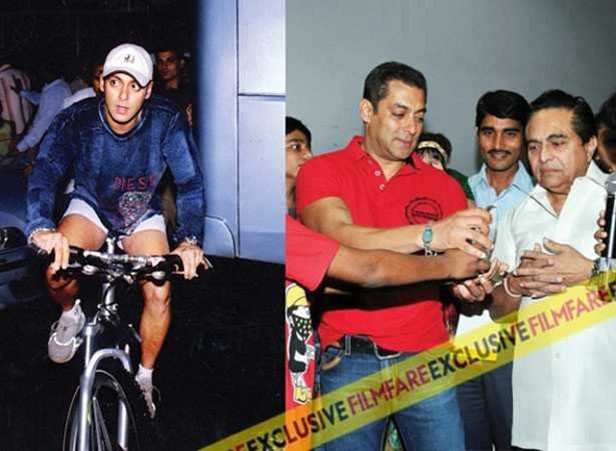 (L) Salman is a fitness buff and often cycles long distance. Sometimes even to his sets.

(R) Inaugurating a special cancer facility opened with the proceeds garnered from proceeds of Being Human. 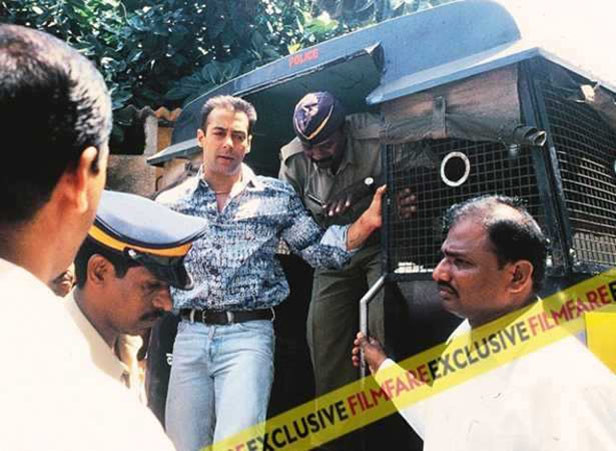 Seen here in the company of the police while deposing his statement during the hit and run case.

Fight cub
Salman Khan appeared to have a showdown with just about everyone in the industry. Be it Aamir Khan, Shah Rukh Khan, Vivek Oberoi, Ranbir Kapoor but the fights weren’t taken seriously by his fans because they knew he was a cub flexing his muscles and not a tiger on the prowl. More serious were allegations of rash driving, resulting in manslaughter and the dreaded poaching case that haunt him even now. It seems the brat has wisened up of late. He has become an accomplished painter and has founded a charity called Being Human, which helps him channel his energies onto the calmer terrain. 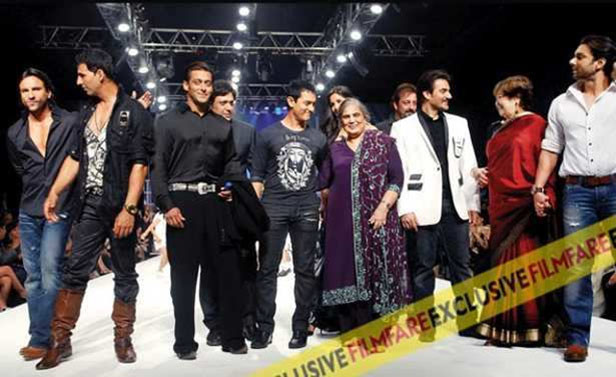 He enjoys tremendous goodwill in the industry. Here, who’s who like Saif Ali Khan, Akshay Kumar, Govinda, Aamir Khan walk the ramp for Being Human. 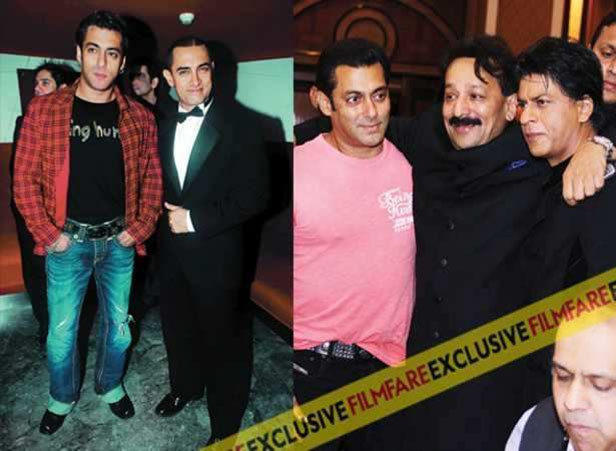 (L) Salman and Aamir were a hoot in Andaz Apna Apna. But then things soured between them. They currently enjoy a blow-hot, blow cold friendship.

(R) After their spat on Katrina Kaif’s birthday in 2008, Salman and Shah Rukh Khan weren’t on talking terms. The duo patched up later at the insistence of politician Baba Siddiqui at his iftaar party. 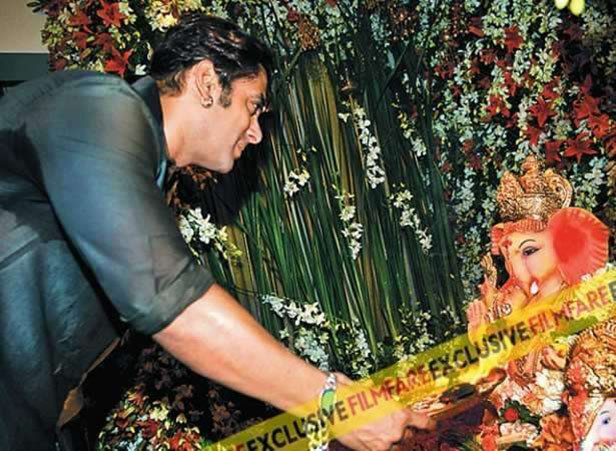 Salman’s house enjoys a cosmopolitan existence. They celebrate Ganesh Chaturthi with much gusto every year.

Love, actually
Sangeeta Bijlani, Somy Ali, Aishwarya Rai, Katrina Kaif, Iulia Vantur and so many other beauties in between have been projected in media as the love of Salman’s life. The problem is that Bhai hasn’t made it official just as yet. He still remains one of the most eligible bachelors. Let’s hope he finds real love soon, marries and has children. May Russian actor, Iulia Vantur provide some warmth to the winter of his discontent.
Share
Facebook
Twitter
Pinterest
WhatsApp
Previous articleBirthday Special: 55 reasons why we love Salman Khan
Next articleMadhuri Dixit Varun Dhawan Venkatesh take to social media to wish Salman Khan a happy birthday