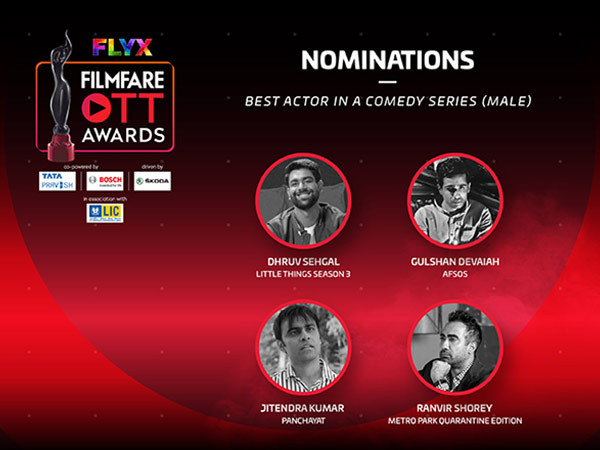 The nominations for the Flyxx Filmfare OTT Awards are in and the nominees are a mix of known and unknown faces. We take a look at the nominees for the  Best Actor Series (Male): Comedy. These are the performers who made the wealth of difference in the series and stood apart because of their split-second comic timing. They were the reason people rooted for the most in their respective series. The characters played by them were hilarious indeed. One can say these characters really stole the show by themselves — Akela hi kaafi hai.

The couple dynamics change in season 3. Dhruv Vats (Dhruv Sehgal) and Kavya Kulkarni (Mithila Palkar) are shown to be in a long-distance relationship and hence we see them going through the problems all such couples share. Dhruv becomes more career-minded and this transition is handled beautifully by the actor.

Nakul, a struggling writer living in Mumbai, is perpetually depressed. He wants to commit suicide but strangely is unable to do so. He gets into one misadventure after the other in this pursuit. Gulshan Devaiah, while keeping you in the laughs, makes this central conceit relatable to the viewers.

Abhishek Tripathy is a typical urbanite, who thanks to the circumstances, finds himself working in a village. Jeetendra Kumar really comes across as the stranger in a strange land. It’s a situational comedy and hence much depends on how he reacts to the new and extraordinary situations that befall him. Needless to say, Jitendra Kumar has made the character his own and has made the viewers root for him.

Right from his body language, tone, accent, and mannerisms to his dialogue delivery, Ranvir Shorey plays Kalpesh Kalpesh Patel, a typical Indian man who runs an American convenience store called Pay and Run in the heart of India-town, New Jersey. Kalpesh is someone who hasn’t lost his Indianness despite being in America for long and his takes on different situations bring on the laugh out loud moments in the show.