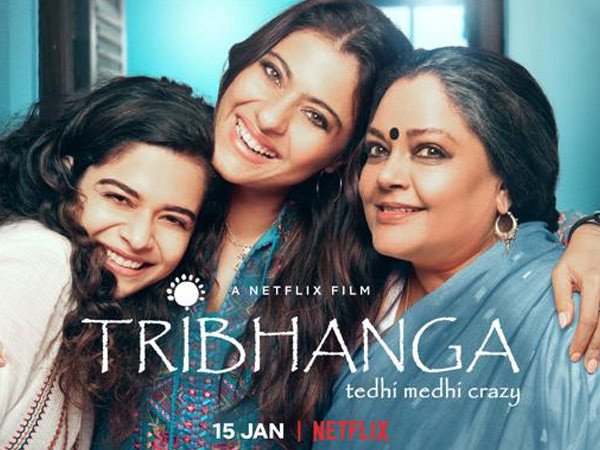 We’re the product of our choices, as they say. And have to suffer the consequences of both good and bad choices. No one makes perfect choices. What’s important is that those choices should be our own choices and shouldn’t be imposed on us. Living with the consequences of a wrong choice, as long as it was an independent choice, is still a victory — at least that’s the lesson of the film. Tribhanga, whose title is taken from a dance pose in Odissi dance, looks at the life of three generations of women who made their own choices and how those choices affected them and those around them.

For Nayantara Apte (Tanvi Azmi), writing is more than her passion, it’s her whole world. It’s her regret that she can’t write her autobiography in longhand as she suffers from arthritis. She left her weak husband and her complaining mother-in-law because they couldn’t relate to her madness. She becomes a successful writer but sadly neglects her children, who grow up emotionally scarred. Her daughter Anuradha, in particular, faces real trauma but she remains blind to it at the time. Anuradha Apte (Kajol) grows up to become an acclaimed actress and Odissi dancer. However, we don’t get to see her shooting or to perform on stage. She’s a foul-mouthed, loud and edgy individual, and like her mother doesn’t believe in the conventions of marriage and unknowingly bestows the same emotional scars on her daughter Masha (Mithila Palkar) as her mother did on her. Masha, a child born of wedlock, chooses to marry into a traditional joint family in search of stability, only to realise that everything comes with a price.

Tribhanga points out that making a free choice is harder for women than it’s for men. That patriarchy will always come in the way of women, no matter what. So it’s better to show the middle finger to society and just live your own life. Apart from its feminist stance, the film portrays how complicated relationships can be. And it’s this complexity which hasn’t been expertly navigated by Renuka Shahane, who makes her Hindi directorial debut with the film.

While Anuradha does care deeply for her mother and shows that by being at her side when she slips into a coma, she also has a genuine reason for hating her. Their reconciliation would require sessions of dialogue rather than the sudden heart change as seen in the film. And how’s Anuradha blind to the fact that she’s not paying enough attention to her daughter, a crime for which she and her brother Robindro (Vaibhav Tatwawaadi), who looks like he’s part of the Hare Krishna movement, never forgave their mother and cut off all ties with her. They even stopped calling her Aai and called her Nayan. Nayan’s attempt at writing a book about her life is her extended love letter to her children, her way of reaching out after years of separation. And she’s helped in this quick fix by her disciple and official biographer Milan Upadhyay (Kunaal Roy Kapoor), who has a penchant of using chaste Hindi and who is offended by cuss words when spoken by women. Milan is the soul of goodness and wants Robindro and Anuradha to forgive her, especially since she’s in a coma.

The film is supposed to be about three women but Kajol and Tanvi Azmi have been given the lion’s share of the proceedings. Mithila Palkar doesn’t have much to do and is underutilised in the film. Nayan is shown to be brutally honest and Tanvi puts lots of candour in her performance, neither hiding the flaws nor needlessly putting an extra polish on her character’s strengths. Anuradha goes from one extreme to the other and Kajol has caught onto that characteristic and plays her character with the required verve and energy. It’s a pleasure to watch her owning the screen in her scenes. She has shown once more that she really knows how to emotionally connect with the audience. Masha is an underwritten character. Mithila gets one strong scene in the film and executes it flawlessly. We would have liked more scenes involving her and Kajol. Supporting characters, like veteran Kanwaljeet, Manav Kaul, Vaibhav Tatwawaadi and Kunaal Roy Kapur too look good doing their bits.

All in all, while Renuka Shahane has made an all-heart film, it’s something of a work in progress, rather than a finished product. But it’s a fine beginning nevertheless and she holds true promise for the future.